We, students of the first year of baccalaureate have taken part in a trip to London. We took the plane very early in the morning and arrived in London at 7.50.  After leaving the luggage at the hotel, the sightseeing began with the visit to the Buckingham Palace, Big Ben, Westminster Abbey, 10 Downing Street and the London Eye.  We had lunch before visiting the British Museum, where we could admire the Egyptian part and the Rosetta stone.  The students in teams explained the different buildings in English.  After the British Museum, we went past the National Gallery, but unfortunately, we didn’t have time to enter.  We could also see Covent Garden, Trafalgar Square, Piccadilly Circus and we had free time to walk along Oxford and Regent’s street.  We went to have dinner at Chinatown and as we were so tired and it was so cold, we went to the hotel and relaxed. 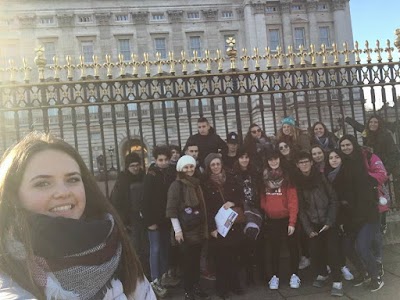 On Wednesday we got up early and after breakfast we went to visit Saint Paul’s Cathedral and to Camden where we had to interview young people about what they do in their free time.  When we come back to school, we’ll write the conclusions and carry out a comparative study.  At 13.00, we went to visit the Natural History Museum, where the science students had to see the Human Biology part as a compulsory part of the curriculum of the science subject and we also saw the dinosaur’s part.  Some students had lunch in Hyde Park and others preferred to buy a burger on the way to the hotel. Our trip finished at 20.05 when we took our plane back to Barcelona.

Our experience has been very positive because we have been able to visit the country and improve the language that we’ve been learning since we were 6 years old.  Interviewing and shopping has offered us the  opportunity of speaking with native speakers and knowing more about the British culture.  Unfortunately it was a very short trip because of the crisis and we wish we could come back in the future.